A recent paper in Nature www.nature.com co-authored by the new Chair of Zoology, Professor Yvonne Buckley, shows that fertilisation of grasslands breaks down the link between plant diversity and stable biomass production. In unfertilised grasslands higher species diversity means that grassland production is more stable from year to year and this appears to be because of asynchronicity in species responses to variation in the environment from year to year, so a bad year for one species is a good year for another species and in this way relatively stable production is maintained. In fertilised grasslands however species responses to environmental conditions from year to year are more synchronous so a good year is good for many species and likewise a poor year is poor for many species so overall grassland production is more variable. Natural grasslands make up a major portion of the world’s landmass. Grassland production is vitally important for several ecosystem services including livestock production and the storage of atmospheric carbon, so we need to understand how pastures and grasslands provide these services as well as what happens when grasslands are changed through fertiliser inputs or deposition from the atmosphere. 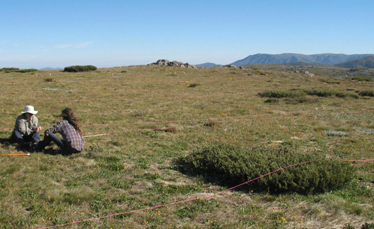 This research represents the first time that such a large experiment has been conducted using naturally occurring sites, and was only made possible due to the formation of the Nutrient Network, also known as ‘NutNet’ http://www.nutnet.umn.edu/ .  The idea behind NutNet was to standardise the way that ecology research is conducted, which is an important consideration when extrapolating scientific findings and increasing confidence in their general applicability. NutNet is a grass-roots campaign supported by scientists who volunteer their time and resources. There are now 75 sites around the world that are run by more than 100 scientists participating in the ongoing NutNet experiment. Professor Buckley has recently won funding from the EU Marie-Curie grant system to establish the first Irish site to add to NutNet’s growing catchment area. She hopes that further research will assess long-term trends in plant species diversity and ecosystem stability, and explore extinctions, species invasions, and other important changes in national and international grasslands. It's important that we include Irish grasslands in the experimental network as in our grasslands we have relatively low rates of atmospheric nitrogen deposition, which will provide an important contrast with other sites in Europe and the USA. We also have grassland sites which range from the diverse limestone grasslands of the Burren to highly productive dairy country, spanning areas of high biodiversity value as well as high economic value. For more information please contact Yvonne Buckley buckleyy@tcd.ie