In a bid to honour the London 2012 Olympic sporting legacy,  Susannah Cass (27) a PhD student from Botany in the School of Natural Sciences, Captained a four-strong ‘Row2Rio’ team who have rowed 3,400 miles, 24 hours a day for 56 days from Portugal to reach the next Olympic host nation of Brazil. Susannah Cass, Jake Heath, Mel Parker, and Luke Richmond will cover nearly 7,000 miles by human power alone and are setting out to achieve three world records in the process; the first group to row a new ocean route, the first mixed crew and the first team of four to cross the Atlantic in a rowing boat. The Row2Rio team landed 35 miles north of Recife on Saturday, April 23rd 2016 having set off from Portugal 56 days previously. 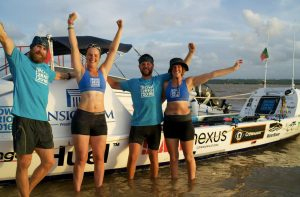 The Row2Rio team were ecstatic to have landed in Brazil on Saturday after almost two months at sea, photo courtesy of Rio2Rio.

The team were said to be ‘weary but ecstatic’ as they walked on dry land for the first time in almost two months, but received a warm welcome by a crowd of family and friends.

The group left the Olympic Park in Stratford, London, on January 9th and cycled 1,495 miles to Lagos in Portugal. From there they boarded their rowing boat and set off for Brazil. Having landed in Brazil, they will once again get on their bikes to complete their challenge by cycling to Rio de Janeiro. They hope to arrive in the city in a month’s time.

Rowing 24 hours a day in two hour shifts, the journey has been physically and emotionally gruelling for the group. “You cannot really prepare your body for it. You just have to get out and do it,” Heath explains. “I was surprised by how supportive people can be when you are out working at 2AM on the ocean and it sounds like hell on Earth out there.”

“It is when you step out of the hatch in the pitch black at night with crazy force winds hitting you from the side. You can hear the wind and waves crashing with the boat. We have also got to get fed and get to sleep. We have to just get back out there and get the rest of the team back in to rest.”

Susannah, no stranger to demanding rowing, is currently the Guinness world record holder for the youngest female to row the mid pacific in a team of four that rowed from Monterey in California to O’ahu in Hawaii from the 9th of June to the 5th of August 2014.

Susannah was awarded a University Pink in 2015.  The Trinity Pink, designed to correspond to the Light Blue of Cambridge and the Dark Blue of Oxford, is awarded on individual sporting merit which is generally assessed in terms of outstanding club performance, representative selection or external achievement.

Susannah, already a Cambridge Full Blue having rowed in the Women's Boat Race against Oxford, came to Trinity in 2009. Her contribution to the sport, to Trinity and especially to Dublin University Ladies Boat Club in her 5 years in the club has been remarkable. As well as winning numerous University Championships, countless pennants, 2 Senior Colours and representing Ireland at the Home International Regatta, Susannah has also excelled in her studies, completing an MSc with Distinction in Biodiversity, a PhD in Botany, all the while holding committee positions both as DUCAC Vice Chair and DULBC Development Officer at the same time.

The trip has been three years in the making and has cost close to £75,000. The money has been gathered through sponsorship, personal contributions and loans. The challenge is in aid of Macmillan Cancer Support charity who the team are raising money for. To keep up with Row2Rio’s progress, like their Facebook page and follow their blog. To donate, click here.