Zoologists from Trinity, working with partners from Halu Oleo University (UHO) and Operation Wallacea, have discovered two beautiful new bird species in the Wakatobi Archipelago of Sulawesi, Indonesia. Their work sheds more light on the complex evolutionary puzzle of how new species emerge.

Details of their discovery – of the Wakatobi white-eye and the Wangi-wangi white-eye – have been published today (Wednesday April 24) in the prestigious Zoological Journal of the Linnean Society. This is the same journal in which Alfred Wallace and Charles Darwin published their game-changing original ideas about speciation in 1858. 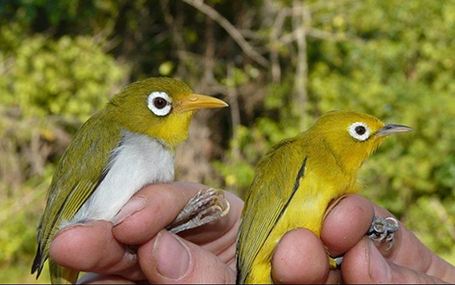 Precisely defining what a species is and how species arise has intrigued scientists for centuries; we may feel we intuitively know what a species is but the closer we look the more complicated things become. For example, when considering closely related populations of organisms, it can be very hard to decide where to draw the line. Recent research has found that many distinct species inter-breed to some extent, blurring the lines further.

Even if we accept the complications inherent in the definition of species, there is still so much we have to learn about how new species arise. Thinkers from Aristotle to Charles Darwin and onwards have spent their lives working to understand this topic.

Now, Professor Nicola Marples’ research group from Trinity’s School of Natural Sciences has added another chapter to the speciation storybook.

Professor Marples’ group has been studying birds on Sulawesi, in Indonesia, and its offshore islands since 1999. Sulawesi is a particularly peculiar island known for its weird and wonderful plants and animals. It lies in the middle of Indonesia, which sits at a geographic boundary between Asian and Australian species. Sulawesi has an unusually high number of endemic species (unique species found nowhere else), due to the deep ocean trenches that isolated it from other land masses, even during past ice ages, when ocean levels dropped.